Whatever you call it, we all seem to want more.

People say things like “I just don’t have the willpower to lose weight” or “I’m not disciplined enough to write a book”. While it may feel like the lack of willpower is the problem, these are really just excuses.

And while we might want to just sit around and lament about our lack of self control that stops us from reaching our goals – this is neither productive nor useful. Unfortunately, the willpower fairy isn’t going to come and sprinkle some dust on you to get you to reach your goals.

In order to cultivate willpower we need to first clear some things up:

Back in the 90s a study was done (find more in this book) where people were given 2 plates but were assigned to either eat from the plate of radishes or the plate of cookies. They were then asked to solve a puzzle (that happened to be impossible). The people that were only allowed to eat the radishes gave up sooner on the puzzle than the cookie eaters. The assumption made was that if you had to exercise self control to resist eating the cookies, that your will power to work on the puzzle was then depleted. Therefore your willpower is a finite resource.

In the ensuing 30 years holes have been punched in this theory and biases in the research have come to light. While working longer might be correlated to eating the cookies, it isn’t necessarily the cause.

Believing that willpower is finite takes a lot of the pressure off ourselves to be accountable. Saying that you’ve just “run out” of willpower also gives you a convenient excuse to plop on the couch with Netflix and a bag of chips instead of working out or building a side hustle.

If instead you believe that, while it may feel like it comes and goes, willpower is actually something you can tap into, then that puts more onus on you to take responsibility for the outcomes of your actions. It might not be as easy to manage those emotions when you can’t just toss an excuse at the problem, but it will help you realize that you have more control over yourself than you once thought you did. Which means that those dreams that you have can, in fact, be realized.

I hear these words of wisdom in the voice of Mel Robbins. She says this all the time about getting the things done that will get you to your goals. While motivation may strike here and there, it’s not a constant that we can rely on. While it’s so much easier to work when you’re motivated, lacking motivation fails to be a good reason to NOT be working.

Not feeling like it is just one more of those excuses that we give ourselves to skip the hard stuff. Unfortunately, you many not feel like doing the work that it takes to get to your goals. But if you want to get there, you’re going to have to do it.

“Inspiration is for amateurs. The rest of us just show up and get to work.”

Letting go of this need to feel like working is actually very empowering. Consider how much stronger the sense of satisfaction is when you’ve busted out a task that you didn’t really want to do. That sense of satisfaction and a feeling of making progress will actually help cultivate a sense of motivation. Then with that motivation, you won’t need as much willpower to do the work.

Of course not all of us are gloriously blessed with massive amounts of willpower – but that doesn’t mean we can’t take steps to help us cultivate more AND reduce our need for it in the first place. Below are some practical ways to accomplish this.

I talk about this all the time, but it’s because it’s so crucial. The things that deplete you and the things that energize you matter.

Doing things that are energizing is so much easier than doing things that sap your energy. If you absolutely hate math then working to become an accountant is going to take an astonishing amount of willpower. That is going to drain you on a regular basis and you’re unlikely to be very energized to do any other things that require willpower – but would get you to your dreams.

Conversely, if you love math this changes things entirely. While everyone has their rough days where they don’t want to go to work, you won’t need nearly as much willpower to get you through the day. You will be more often energized rather than exhausted.

Consider the the things that require willpower. Are there aspects about it you could change so that they can become more energizing? Maybe going to the gym feels like a total burden, but playing softball doesn’t. How about signing up for a team and using that as your primary exercise instead?

In a 24/7, always connected, never ending social media feed kind of world we are bombarded with distractions. Our brains love notifications. You get a little hit of dopamine for seeing the notification and consuming that new information.

We are literally addicted to novelty. It’s what helped early man want to explore and learn about his environment. Generally this is a good thing. Not many new inventions or exciting discoveries would have come about if we weren’t so interested in learning – but in the case of today’s society, it’s causing a problem.

These distractions take you off task and reduce the chance of you getting into a flow state with your work. It also means you’ll have to use willpower to get back to work.

Additionally, every time we see or hear the notification, we have to use our willpower to continue working. This is simply a waste of energy that could be better used on our current project.

Save yourself some focus and energy and do everything you can to turn off your notifications, your phone, your email – so you can get your work done without distractions. Not only will this reduce your requirement for willpower, it will help you train your focus so you aren’t self interrupting – or intentionally distracting yourself – as often either.

You know what’s stronger than willpower? Habits. Think about how easy it is to accomplish a habit as opposed to trying to force yourself through a routine. Habits literally require less thinking than a new routine – that is, in fact, their whole purpose. To free up brain capacity.

And what’s easier than trying to build new habits and break old ones? Replacing the action of the old habits to build better ones. For an in depth explanation about how to accomplish this, check out this post.

Basically you need to figure out what your reward is for accomplishing a habit, and then find a new healthy routine to do instead. If you’re trying to stop the habit of going out to the bar after work, consider your rewards. Maybe it’s because a drink reduces your stress and you want to spend time with your friends. Can you think of a healthier habit you could do instead? What if you joined an after work rec sport club instead? You will still get the necessary stress relief and social time, but in a healthier way. 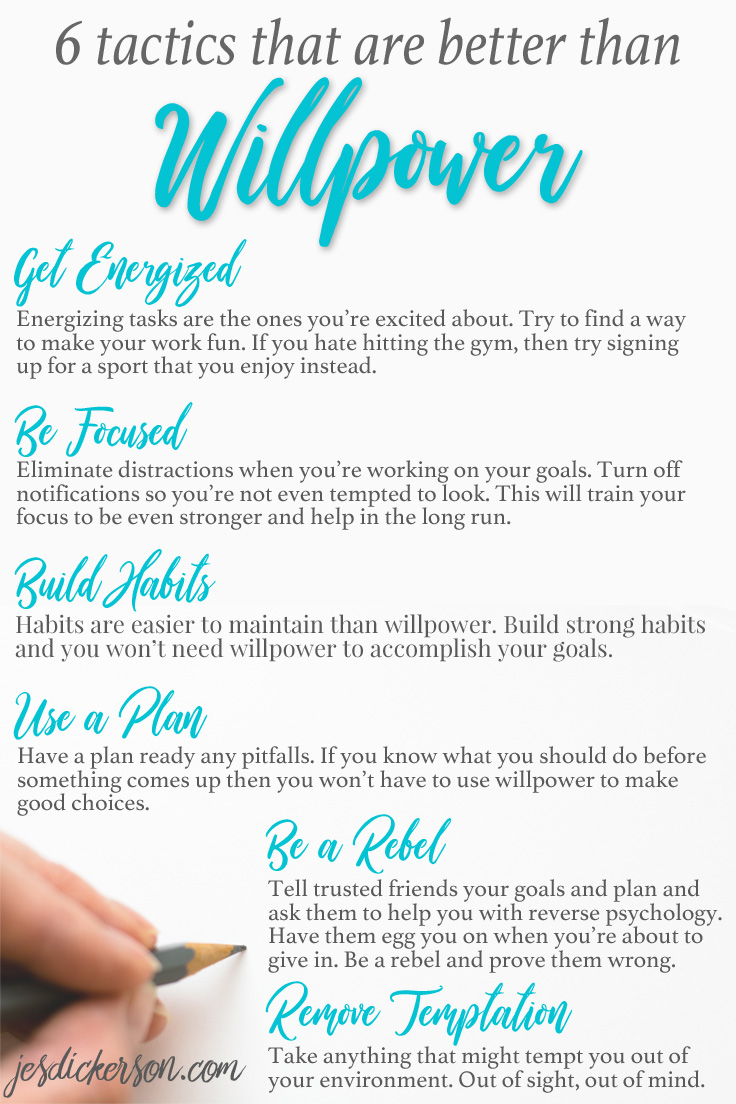 This powerful tool has been shown in 200 studies to increase goal attainment by an average of 200-300%. Those are some serious numbers that make this worth a try.

If-then planning is a simple way to plan out your actions given different scenarios. All you do is consider all of the things that could happen that will derail you, and think of the best choice for those scenarios. This helps prevent you from making a potentially poor snap decision.

Let’s say you’re trying to lose weight, but you’re going out to eat with your friends. You’ve already decided that this restaurant is not worth the splurge and you want to eat healthfully. What are all the potential pitfalls here? Even if you’ve decided on your meal before hand, you can’t control what your friends order. So you might consider these options:

Employ your rebellious side

Ever since you were a teenager you’ve heard about the dangers of peer pressure. You know, the whole, if everyone else is jumping off a bridge, would you do that too? (Anyone else picture their Dad reading a newspaper while they read that line? No, just me?)

But what if you could employ your inner teenager and tap into your rebellious side? I don’t know about you, but nothing lights a fire inside me more than proving someone wrong.

To accomplish this, tell a trusted friend about your goal. Ask them to give you some gentle ribbing and peer pressure when facing your pitfalls.

Instead of them saying something like
“I thought you were on a diet, do you really want that cookie?

Have them try
“Go ahead. Eat that cookie. You know you want to!”

If you’re a very complicit individual, then this tactic might not work for you. But if you’ve got a raging rebellious side like some of us, then you might find proving that friend wrong is motivating and you won’t need as much willpower to resist.

This trick has to be the best option for reducing the requirement for willpower. And you’ve probably heard it given as advice a bunch of different ways. But it all boils down to the same thing – do what you can to change your world so that you don’t have to confront your temptations.

Don’t want to jump into your email or social media first thing in the morning? Keep your phone in your bathroom

Don’t want to snack on oreos after work? Don’t keep them in the house.

Don’t want to binge watch on Netflix? Don’t have a subscription.

If you’re powerless in the face of your temptation, then the best thing to do is to remove it. It’s much easier to use your willpower once a week at the grocery store to NOT buy the oreos than it is to have to use it every night to try to not eat them.

While willpower might not be a finite resource, it does tend to wax and wane. Knowing this, it’s easiest to both learn how to tap into your willpower as well as finding ways to reduce the need for it. By using a combination of these tactics, you can help yourself accomplish all the actions that will get you to your goals.

And if you’re still struggling with find a way to reach your goals, send me a message. Coaching is a perfect way to help you achieve your dreams.

Hi! I’m Jes and I help women go from #stressedtosuccess by working through what’s overwhelming them + stealing their energy. I know all about what it’s like to put everyone else first, feel chained to your to do list, and have zero time for yourself (read my story here). If this sounds like you, learn how to work with me. Coaching with me can help you manage your stress and get control of your overwhelm, so that you can finally get back the freedom to do the things that are important to you.