Lightening the Mental Load: 3 ways to free your mind

Mental load. You may have seen the cartoon floating around the web about it. If you’re a woman (especially if you have additional people – big or small- to take care of – you probably nodded your head through the whole thing.

If you’re not sure what I’m talking about, mental load is the burden of thought that tends to fall on one partner over the other. This usually falls on the woman. Yes, we are the evolutionarily designed caretakers, and often we pick it up without a second thought. But this goes FAR beyond what we’re genetically programmed to do. We have a society that is both pushing women into this position AND simultaneously pulling men out.

WHAT IS MENTAL LOAD?

Before we discuss how we are being molded or what to do about it, let’s discuss what mental load entails. I read quite a few articles in researching this post, and to be honest I was stymied by the amount of things that the bearer of this burden holds in their minds. Even though I do most of the things listed for my family, it didn’t hit me how massive the list of things could be until I saw it written out.

Here is an generalized (and abbreviated) list of the many things I saw in articles:

This doesn’t even include any attempts at maintaining a healthy relationship with your spouse/partner nor does it include any efforts to take care of yourself.

And what you STILL aren’t seeing – even with this giant (yet abbreviated) list, is all the thinking that this takes.

Consider just the grocery shopping. Even if you stay at home and happen to have a spouse that doesn’t mind stopping at the store on the way home – who’s the one that has to notice that you’re out of toilet paper AND remember to tell someone to do something about it.

THAT is the mental load in a nutshell.

MENTAL LOAD BY THE NUMBERS

This mental load increases your stress and distracts you, which causes you to be less productive. Which in turn can prevent you from getting that raise or promotion you’ve been hoping for at work.

Speaking of work, you might think that if the roles are reversed and the woman is the primary breadwinner that now she gets to drop the mental load.

Or at least, that’s what I figured.

According to the 2017 Modern Family Index by Bright Horizons Breadwinning Moms are:

These numbers are staggering. It boggles the mind how even when the woman takes over primary money earning, she still continues to manage all the family and the house responsibilities that she would have managed if she didn’t work.

In fact, overall, regardless of money intake 86% of women are handling all the primary house/family responsibilities.

No wonder women are overwhelmed.

Before we just assume that “this is how they are” or say “why can’t men just step up a little?”, we need to look at the other side.

While the men want to jump in and be involved many of them feel their jobs are in dire risk simply by being a father.

One study had shown that there was a fatherhood bonus. That by becoming a father a man automatically improved in the eyes of the company and generally got promoted faster and earned more.

But there’s a rub to this. He only gets that bonus IF it doesn’t change the amount of time he’s at work or his productivity. This means that the man can’t just take extra days of to care for sick kids or go home early to see that piano recital.

Any amount of leaving early or surprise changes due to family issues causes them to be seen as unreliable (this is also true of women).

The men do want to change as reflected in these numbers:

As much as this may initially feel like a cut and dried case, it very much is not. Men and women both want change, but that has to happen on a larger scale than just having a family meeting about dividing up the chores. 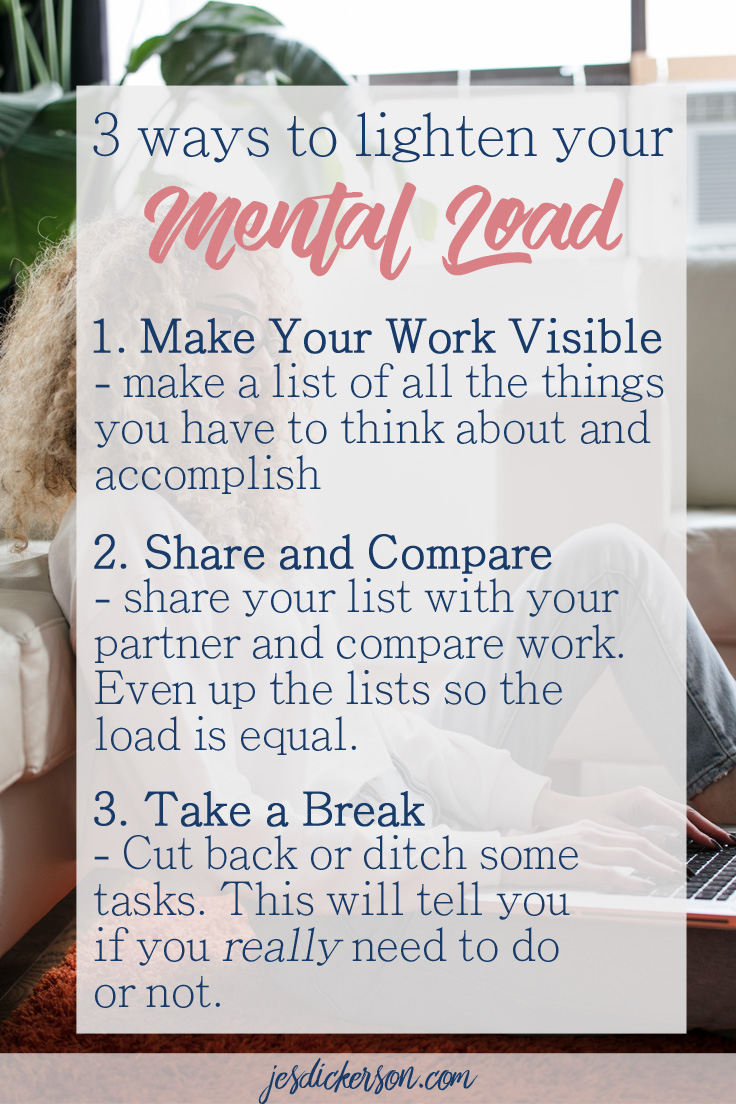 HOW CAN YOU LIGHTEN THE LOAD?

As much as I’d love to see the workplace catch up with this century, it appears that it is slow to arrive. While there are plenty of workplaces (and other countries for that matter!) that see Fathers as equal parents, many of them are stuck in the 50s mentality. This is something we all need to be challenging until they are forced to change.

In the meantime there are some ways that you can work to lighten some of the burden that you are dealing with on a regular basis.

1.  Make what you do visible

It is highly likely that your partner doesn’t have the faintest idea about the magnitude of things that you handle on a daily basis (this is particularly true if you stay at home and they work away from home – and you are accomplishing much of it while they are away). It’s likely that you yourself don’t even realize how much you think about and do.

So it’s time to write it down. Get out your notecards or notebook and go to town. Be clear about the things that you pay attention to, not just the action you take to fix it (notice that we are almost out of laundry soap is one, go get laundry soap is another).

You might ask your partner to also make a similar list. It’s likely you don’t know what they take care of either. Then when you both have your lists it’s time to compare (or if they don’t have a list, just show them all that you do. It will probably be a eye opening).

Consider all the things on the list(s) and see if there are ways to consolidate tasks or give tasks to the partner that has less. If you’re going to trade tasks make sure the whole weight of it switches over. It’s not enough for the partner to take over basic laundry if they’re not also keeping on top of who needs uniforms washed or that you’re running out of soap.

If you’re going to unload a task, unload all the thinking that goes into it. Just dumping tasks is great, but you aren’t going to free up any stress or space in your mind if you’re still worried about whether the proper things are going to be washed in time.

Take some time (a day, a week, a month) off from doing some of your responsibilities. Obviously keep going with the important things like picking up the kids at school, but let go of some of the extra.

The things that you really can’t let go of will make themselves abundantly clear. This has the added bonus of making the person that you’re doing it for keenly aware of your hard work behind the scenes.

The things that you can let go of won’t matter. And then you can ditch them (maybe even for good).

To accomplish this, you might find that you’ve got to let go of some of your expectations. Sure it’s nice to have a house so perfect it could be on a magazine cover or make home cooked meals 365 days a year, but what if you didn’t?

For a perfectionist, some of these things might be incredibly hard to let go. But consider how your mental load is lightened if you stop caring about the dust that accumulates on the baseboards and put that energy into taking care of yourself instead.

Of all the things I’ve heard in a eulogy, I’ve never once heard mentioned the pristine nature of the woman’s moulding.

If you are struggling with managing your mental load or overwhelm, send me a message. Coaching can help you work through this struggle.

Hi! I’m Jes and I help women go from #stressedtosuccess by working through what’s overwhelming them + stealing their energy. I know all about what it’s like to put everyone else first, feel chained to your to do list, and have zero time for yourself (read my story here). If this sounds like you, learn how to work with me. Coaching with me can help you manage your stress and get control of your overwhelm, so that you can finally get back the freedom to do the things that are important to you.